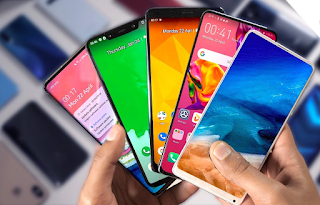 the Huawei meet 20 pro although is released last year is very much one of the company’s current gen phones all you need to do is to take one look at the phone spec sheet and you can see that it’s still very much ahead of the curve especially in terms of battery and charging speed also the camera is a whole lot of fun to use here then we’ve got the redmi note 7 pro a budget phone and you can tell it’s not a flagship but also there is very little to complain about its using the brand new snapdragon 675 chip for very much upper mid-range performance has a weighty 4,000 milliamp hour battery and of course a 48 megapixel camera it’s really rather good alright we’re in the top 5 things are getting serious and in fifth place we’ve actually got two joint phones